Dave Powell is larger than life. The loud-mouthed Australian is big in every way possible – size, volume, ambition, but he makes wines of surprising delicacy. I meet with him on a Tuesday morning at private members’ wine club 67 Pall Mall in St James’s. Running late, he apologises for leaving me hanging a further five minutes while he nips outside for a smoke. Dressed in chinos and a white shirt with his hair tied back in a ponytail, the 53-year-old admits that the staff had to lend him a blazer to meet the club’s formal dress code. “At least they managed to find one that fits,” he quips. 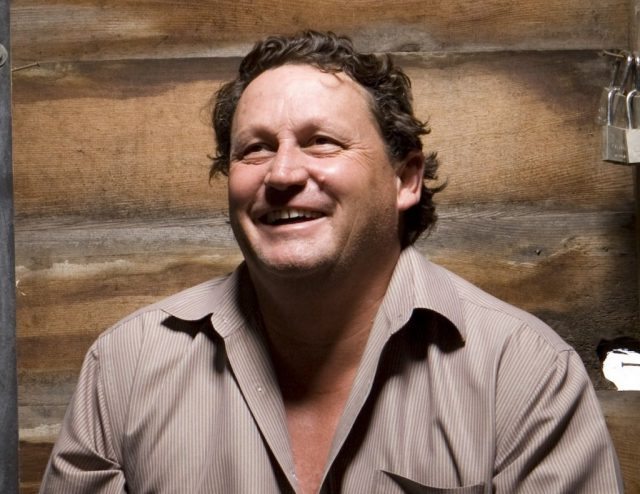 Settling into a chocolate brown leather armchair in the upstairs library, Powell is candid about his very public fallout with American tech billionaire Pete Kight, who ousted Powell from Torbreck, the Barossa Valley winery he founded in 1994, in 2013 when his five-year contract came to an end. The estate was taken over by Kight, who also owns Quivira Vineyards in Healdsburg, California, in 2008 for a reported US$20.5m.

At the time of the split Kight accused Powell of a “volatile” management style and running up an AU$92,000 bill in a Danish strip club. A bitter court battle ensued following Powell’s comments that the 2009 vintage of Torbreck’s £500 top drop The Laird should be declassified due to high levels of volatile acidity. The court case collapsed and the wine was never released.

“Pete wanted to take over Torbreck from the get go and was giving me enough rope to hang myself with. My lawyer told me I was a lamb to the slaughter. I declared myself bankrupt and walked off into the sunset. Towards the end I was the executive winemaker and was travelling seven months of the year and paying people to do what I loved – winemaking.

“I was 20 kilos heavier and was working myself into an early grave. I lost everything but found it liberating. It didn’t scare me having to start from scratch,” he says, adding, “I went from having AU$100 million to nothing. It was vicious, and it’s interesting how that’s when you find out who your real friends are. I created a monster and had to keep it going. I would have never left of my own volition but it’s probably the best thing that ever happened to me.”

Powell isn’t allowed to have anything to do with the current staff at Torbreck and is sad to see the winery he created going downhill. “Pete is making a real pig’s ear of it. Lisa Perrotti-Brown MW of The Wine Advocaterecently wrote about my influence there fading fast. He wants to make the company bigger and has introduced an unnecessary layer of middle management. People will be able to judge for themselves by tasting the wines,” says Powell.

Keen to keep moving forward, the visit to London coincides with the UK launch of Powell & Son, his new wine venture in collaboration with his 22-year-old son Callum. His aims are characteristically immodest – “We want to be the DRC of the Barossa,” he exclaims with brio, “but with some affordable wines in there too as the only problem with DRC is that it’s so expensive you can’t drink the bloody stuff.”

The original plan was for Callum to eventually take over Torbreck, but it transpires that his eldest son never had any interest in taking the reins from him. Having spent a year working with Jean-Louis Chave in Hermitage, he had his own ideas about the style of wine he wanted to make. “I set up the job for him as the Hermitage is the best place to learn about Syrah and Jean-Louis is a good friend of mine,” says Powell.

Torbreck’s former general manager Paul Breen, an old friend of Powell’s who left at the same time as him, has joined the Powell & Son team alongside young Slovenian Igor Kuçiç, a former protégé of Powell.

an empty tank at Powell & Son

Five growers jumped ship after Powell left Torbreck and have since gotten on board with Powell & Son. The range consists of six wines from grapes grown in the Barossa and Eden Valley, some of which come from vines that are more than a century old.

“We’re leasing vineyards at the moment with the aim of eventually buying them. It’s still relatively easy to find land for sale with good fruit in the Barossa. We work predominantly with old vine Shiraz but also with Grenache and Mataro, and I make an Eden Valley Riesling.

“I’ve been surprised how easy it’s been getting access to old vines and great quality fruit – Barossa Valley Grenache is as good as anywhere in the world,” enthuses Powell.

“The Eden Valley is cooler and higher than the Barossa so the growing season is longer and the wines have more elegance and finesse. Barossa Shiraz is rich, dark and chocolaty. They’re like yin and yang. It’s easier to make single vineyard Shiraz in the Eden Valley than the Barossa, which can become a bit one-dimensional by picking point,” he adds.

Having grown up in Adelaide and studied economics, Powell was inspired to focus on Shiraz after winemakers like Peter Lehmann raised its profile in the ‘80s. He believes Australians have themselves to blame for the variety getting a bad wrap. “I benefitted from Parker rediscovering Australian wine and regularly got 100 points from him, but a lot of the Shiraz’ coming out of Australia are overdone, syrupy, one-dimensional crap. 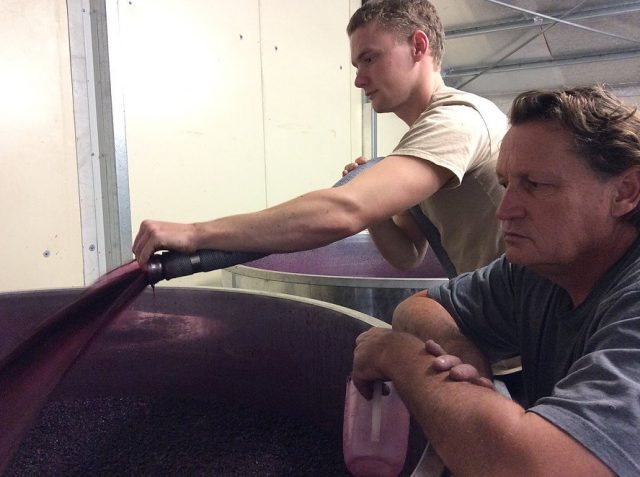 Dave and his son Callium

The worst come from the McLaren Vale but those from the Barossa get tarred with the same brush,” he says, adding, “As Aussie’s we tend not to know when enough’s enough. People are surprised at how elegant and subtle my wines are when they meet me as they are two words that you’d never use to describe me.”

However, he admits that during his last few years at Torbreck “the axis shifted a bit” away from that style without him even realising it. Callum is keen to put his own stamp on the wines and Powell describes his influence on the project as “evident”, having learnt at Chave to seek elegance, finesse and purity of fruit in the wines he makes.

One way of locking in the freshness is the use of foudres that give the wines space to breathe. “Large format wood means the wines are a lot fresher after 18 months than they would be in a standard barrel,” Powell says.

As for whites, the duo made a small amount of Marsanne and Roussane this year and Callum is keen to make a Viognier in the future. “He’s got his own ideas but nothing can replace experience. I’ve no doubt he’ll be able to hold his own with me and might one day be making better wines than me. If he does then that would be great. I have an ego about some things but not about that – you want your kids to be better than you,” he says. 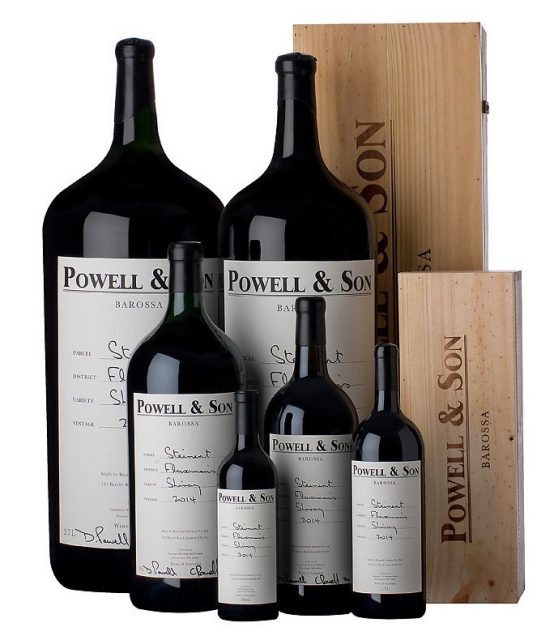 The wines range from £25-500 in price, with top single vineyard Shiraz, Steinert, named after the Eden Valley old vine plot from which it hails, matching The Laird in price. Powell is bullish about his pricing strategy and believes the £500 tag for Steinert is justified.

“If you make a world-class wine it’s okay to charge a world-class price; I did it with Torbreck repeatedly. We only made 220 cases of the first vintage and have just 25 left so it’s selling. People seeking the finer things are more likely to buy it if it’s more expensive, but it’s got to be good. You can’t dress mutton up as lamb – you’ll be shot down in flames and so you should,” he says.

“It’s important to have an icon wine in your portfolio as it helps subsidise the other wines in the range. The biggest challenge is trying to sell Australian wines at that price. People still think of us as the cheap and cheerful stuff you buy at Tesco, yet there’s no problem with selling California wines at that price,” he adds.

Powell reports that Steinert is selling well back home in Australia and also in Hong Kong, which together form the bulk of Powell & Son’s sales. He also sells small amounts in Britain through Zonin UK, and also in Canada, Denmark, France and the US.

Over lunch we try the full Powell & Son range. The wines are elegant and idiosyncratic, the single vineyard Shiraz’ in particular displaying meaty, savoury notes and something of a wild streak. Powell insists this is intentional as he likes a bit of funk in his wines.

“I’m into making slightly funky wines that walk the line. I don’t like to play it safe. A bit of funk gives complexity to a wine as it ages. I go for quite a reductive style after fermentation, but funky wines need a lot of sulphur to buffer the high pH,” he reveals. As for the cork versus screwcap debate, Powell is firmly in the cork camp. “I’m not at all convinced about screwcaps – if there’s a problem in the wine then the screwcap will find it and amplify it. If there’s a problem with the cork then you haven’t paid enough for it,” he says.

As for what the future holds, I’m keen to know whether he’d ever return to Torbreck if the opportunity arose. “I’ve been offered a lot of money to make another Torbreck but I’m not interested in going backwards, it would be like getting back together with one of my ex-wives,” he quips. Finally, I dare to ask him about the Danish strip club. According to Powell he was a victim of credit card fraud.

“The strip club thing never happened – for a start we were in a Champagne bar not a strip club, and I was ripped off there. I ended up paying AU$24,000 for a bottle of Cristal, I didn’t even look at the receipt at the time,” he insists. Powell talks a good game and his enthusiasm is contagious. It’s hard to know how much of what he says is spin – rumour has it that he has a brand on his bottom from an unfortunate incident in Scandinavia – but one thing’s for sure, the man knows how to make mind-blowingly good wine.